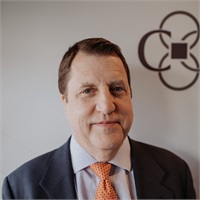 Robert Stutzman, Primary Advisor, Wealth Manager, and Certified Financial Planner (CFP), has worked
in the financial industry for 37 years. During that time, he has continued to work on forming relationships
and understanding different financial scenarios. He prides himself on being direct and straightforward as
he works with his clients.
Bob was born in Gothenburg, Nebraska, and moved to Bellevue, Nebraska, when he was nine years old.
He received a Bachelor of Science in Business Management from the University of Nebraska Omaha. He
is one of 8 children and was inspired to enter the financial industry to help others work toward and
achieve long-term financial goals and aspirations. He is a Certified Financial Professional (CFP) and
holds Series 6, 7, 24, 26, 63, and 66 securities registrations.
As he started his career in 1983, he was offered a position with First Investors after graduation. He built
and managed an office of financial professionals until the early 2000s when he transitioned back to
working full-time with clients. Foresters Financial acquired First Investors in 2011, and in June of 2019,
Cetera purchased the Financial Professional arm of Foresters Financial. Since the acquisition by Cetera,
he enjoys working as a team at OWM Inc.
Bob and his wife Jane have been married for 38 years. They have three grown children, Mike, Annie, and
Mary. Bob and Jane live in Papillion, Nebraska, where he enjoys playing golf, running, and attending
Creighton Blue Jay basketball games. Bob and Jane love to travel; they enjoy seeing new places and
visiting Europe.
The Stutzman family has spent a lot of time with Gross Catholic High School as all three of Bob and
Jane’s children, and Jane are alumni.